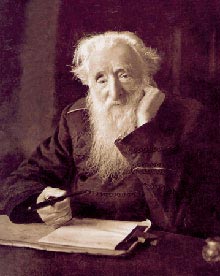 O Boundless Salvation – perhaps the most well-known song of The Salvation Army – was for the composer, General William Booth, the fruit of a sleepless night in 1893 spent meditating on the salvation that is ours in Christ Jesus.

The song was sung for the first time that year at the Boundless Salvation Campaign meetings in Exeter Hall. And when William Booth appeared for the last time in public in May 1912, he used the song as part of his 83rd birthday celebration. Since theen, it has been affectionately known as the Founder’s Song.

Boundless means 'having no boundaries, without limits', and as such, speaks to us of God’s boundless love, grace, mercy and salvation. That boundlessness which is as deep as an ocean is available to every man, woman and child on the face of the earth.

The Australia Southern Territory has produced a DVD series based on the history, mission and theology of The Salvation Army entitled Boundless Salvation. In the opening moments of this series, John Cleary, writer, producer and host says these words: 'Boundless Salvation, the anthem of an army, authored by its Founder. It is a call that must be renewed for each generation.'

The 2015 International Congress gives us the chance to renew that call and to rally the troops of this generation. With that anthem, we can remind ourselves that we, The Salvation Army, believe today, as did those who came before us, that God's salvation is still available to the whole world, and that all of humanity can be redeemed by the blood of Jesus Christ.

It is for these reasons that the theme for the 150th anniversary of the founding of The Salvation Army will be Boundless - The Whole World Redeeming, featuring Ephesians 3:8 'preach to the nations the boundless riches of Christ'.

It is our sincere prayer that at the conclusion of our five days together in the East End of London, that every Salvationist – regardless of what language they speak or in which corner of the earth they serve – would make the words of the Founder's Song their heart's prayer and their life's anthem:

And now, hallelujah, the rest of my days;
Shall gladly be spent in promoting his praise.
Who opened his bosom to pour out this sea;
Of Boundless salvation for you and for me.