Zookeeper Dale and his animal friends are having a great time at Boundless. 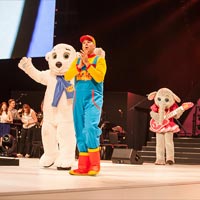 Since the children’s entertainment group was launched in New Zealand in 2012 – with help from an ‘entrepreneurial mission’ fund – more than 70,000 people have seen them perform.

‘We’re really excited to take Zoo Boogie offshore, to see what different cultures think of it and if it has international appeal,’ said Blair Dale, who plays Zookeeper Dale.

Zoo Boogie began after Blair and his wife took their two children to a live show by children’s entertainers The Wiggles. Blair was inspired by the group’s popularity with its young audience, but noticed the Wiggles also had a wider influence – parents and grandparents were singing along to every song.

‘I had one of those light-bulb moments,’ he said. ‘I started to wonder: what if there was a brand like The Wiggles that was equally influential but with a deeper purpose? And what if, at the heart of that group’s music, was an underlying message that helped shape the character of our children?’

Children meet Levi, the young lion who can’t wait to become king and boss people around. Max the monkey finds it hard to stay still – he’s developing self-control. Boris the polar bear is working on keeping his joy levels up, because sometimes he gets a little down in the dumps. And Ella the elephant can sometimes be self-absorbed, so Zookeeper Dale is encouraging her to be kinder.

‘We’re talking about values that are important for any kid,’ Blair said. ‘We’re sowing seeds and we trust God to water those seeds.’