How can people of faith better fight for social justice in the 21st century? That was the topic for a panel from the International Social Justice Commission, moderated by Director, Lieut-Colonel Dean Pallant, that included General André Cox, Andrew Felton (Head of the World Bank, London), Commissioner Robert Donaldson (Chair, International Moral and Social Issues Council), Commissioner Lalngaihawmi (Territorial Commander, India Eastern Territory) and Chris Brekke (Others - Trade for Hope). 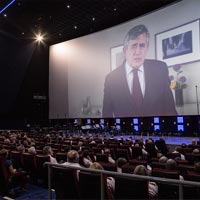 The session opened with a video greeting from former British Prime Minister Gordon Brown who congratulated the Army on its 150th anniversary and commended the organisation for pledging its support to one of the biggest petitions in history, #UpForSchool, which demands that world leaders take immediate action to get every child into school.

‘Why should Salvationists fight for social justice?’ challenged General Cox. ‘Social justice is at the very core of who and what we are as an organisation.’ The General said that to be more effective in its work, The Salvation Army needs to have more engagement in legislation and policy design. ‘We should be willing to reach out to politicians and people of different faiths – we need to get out there!’

The question-and-answer session was thoughtful and included debate about religion and government, and whether the Army should get involved in abortion legislation in South Africa. The session ended with a question about the recent US Supreme Court decision to legalise gay marriage, how this could affect the work of the Army and how it manages its relations with the LGBT community.

‘The decision does not affect the work of the Army,’ said the General. ‘The gospel is preached to whosoever, no matter race, culture, gender or sexual orientation. It is a hugely complex area, but if we are going to be true we have to build bridges and engage in dialogue. We have to face we are all sinners, and we have received God’s grace and therefore we should offer God’s grace wherever we go.’