An Army of Integrity

There was a buzz of anticipation as Salvationists packed into The O2 arena for the final session of Boundless 2015. Contributions by the International Staff Band (ISB), International Staff Songsters (ISS) and Mannssambandet prepared the way for worship with an emphasis on the Holy Spirit, further enhanced by multimedia, dance and vocal soloist Ayoung Lee with ‘Send the Fire’. 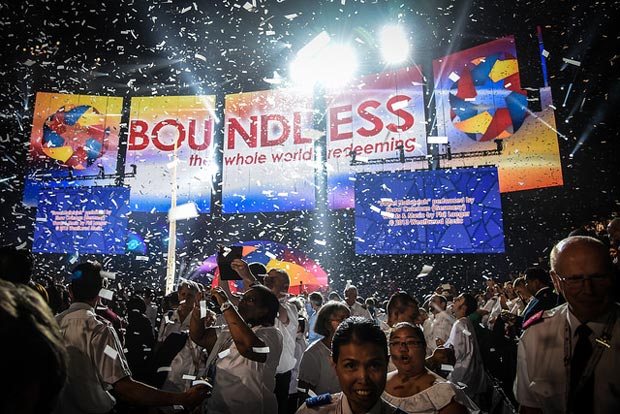 The screens displayed an international Army at prayer, as many people offered prayer in different languages and places. The sound of prayer continued as three delegates prayed in their respective languages before the Chief of the Staff (Commissioner William A. Roberts) drew the prayers together and prayed ‘help us to listen’ and ‘help us to respond’.

In a spirit of worship, Vasa Gospel choir sang with energy and sincerity ‘Great Is The Lord’. Ayoung Lee then started to sing the great hymn ‘Holy, Holy, Holy’ and was joined by a virtual choir of Salvationists from around the world whose individual images – supplied online – appeared on the screens. The virtual choir was swelled by the capacity congregation in the arena to create a great paean with images of the virtual choir shown on the backdrop of an Army flag that gently waved. Congress-goers were left in no doubt about the great universal company of Salvationists who were also praising God with them at that time.

General André Cox introduced William Flinn, a soldier of Pasadena Tabernacle Corps in the USA Western Territory, whose service has included many years of music leadership. He is the first soldier to be inducted into the National Advisory Board of America and, in his role as President of the Pasadena Tournament of Roses, his witness is known. His service exemplifies the spirit of Christian excellence in spreading the gospel message, and the General admitted him to the Order of the Founder, the highest Salvation Army award..

The General then told the congregation that in this anniversary year it was right that recognition should be given to a UK Salvationist. He invited Divisional Envoy Iris Jones (Murton) to join him, saying: ‘She has led the corps with strength of will, determination and almost single-handedly for 30 years, maintaining a busy schedule of activities including public house ministry three evenings a week. She continues to look at new ways to make the gospel attractive and relevant.’ During this time she has not been paid an allowance or salary of any kind. For her ministry of sacrificial service and continued Kingdom impact, the General admitted Iris Jones to the Order of the Founder.

Selected Scripture was spoken in various languages before the ISB contributed ‘The Kingdom Triumphant’ with the powerful reminder of the song ‘Lo! He Comes With Clouds Descending’.

The Bill Booth Theater Company focused on the subject of integrity in their sketch ‘Hold It Up To The Light’. Using the example of a cracked pot being presented as perfect, the question was asked: ‘If your life and heart were held up to the light would there be cracks?’ The sketch concluded with the thought that God flows through the broken places to others.

A multimedia depicted the General’s dream for the Army, on which the main congress sessions were based, after which people were asked to consider if they needed to do to make the ideas of the dream a reality.

‘What has this celebration been all about?’ asked the General, and ‘What is going to change? What is God calling you to do?’ He said the dream will only become a reality when lives are transformed by the Holy Spirit and that holiness is the visible sign of salvation.

‘We must be totally committed and dedicated to the task assigned to us. If we’re convinced of our call we will live lives fully surrendered to God,’ he said. ‘Our worship needs to be more than speaking or listening to God. It must be about total surrender. We need a sense of urgency in a world where there is so much injustice and need.’

He then referred to Vachel Linday’s poem ‘General William Booth Enters Into Heaven’ with images of people washed in the Blood and the Army at war against darkness and despair, saying: ‘This is something that must engage everyone of us. I fear we have become comfortable, contented and settled and detached from the reality of world suffering.’

He reminded everyone: ‘All have sinned this was why God sent us a Saviour. Too many people are living in poverty and exclusion, too many are lonely.’ In the vision of William Booth depicted in the Darkest England poster, he said: ‘We see Salvationists, manning the lifeboats and rescuing those in the seas… We are still and Army that rescues those who are damaged by life… Our lives can point people to Christ… All our programmes are but a gateway to the hearts and minds of people.’

The General went on to remind listeners that there are no limits to what God can do in individual lives. ‘This is boundless salvation’, he said, ‘A total surrender of our lives and the total commitment to the mission.’ These challenging words were followed by the ISS with ‘Bow the Knee’.

The Chief reminded listeners of the General’s call to action and asked: ‘What is he saying to you right now?’  During the singing of ‘Master Speak’ many engaged in prayerful moments of commitment, some moving forward in commitment.

In leading ‘O Boundless Salvation!’ the Chief asked that this song might take on a new or fresher meaning.

Earlier the General had acknowledged the roles played in organising the congress by Commissioner William Cochrane (International Secretary to the Chief of the Staff), Lieut-Colonels Eddie and Kathy Hobgood and all the technicians who made the theme of Boundless a reality.

Commissioner Cochrane concluded worship with the doxology from Jude.

Tweets by @Boundless2015
Ephesians 3:8 - Preach to the nations the BOUNDLESS riches of Christ