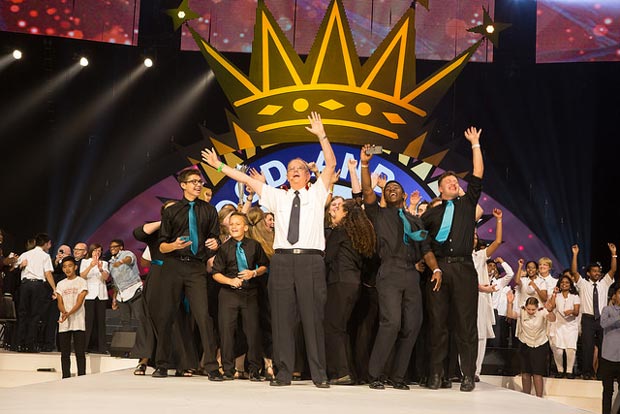 This statement by 15-year-old Sean Voeller, a Salvationist from the USA Central Territory who accepted God at the age of five, marked the beginning of session six, “A Youthful Army”. We are the testimony of what God can do when one person says “Yes!” to him.’

The session consisted of various testimonies reflecting different youth perspectives: Major Janet Robson, International Youth and Children’s Secretary at International Headquarters; young Salvationist Mercy Gabriel Christian; Commissioner William H. Roberts (via video), the Chief of the Staff (Commissioner William A. Roberts), his son Bill Roberts and his grandson Noah Roberts; Major Stephen Yoder; and Desmond Thom from Zimbabwe, whose testimony was given by a friend as he was unable to obtain a visa.

Each person spoke with a torch in hand, talking about how the Army influenced them in their youth and their future. After each testimony, the torches were handed off to individuals who ‘flew’ to the top of The Salvation Army crest on stage to light the five stars on the crown.

General André Cox and Commissioner Silvia Cox gave their testimonies. ‘Young people are extremely precious,’ General Cox said. ‘I don’t believe they are the future of the Army – they are the Army of today.’

The General challenged those who did not have existing development programmes for youth to fix that in a year.

‘These young people want to be mobilised,’ he said. ‘I pray they won’t just be here for the fun and laughter, but that they will truly open their hearts to God so that the future of The Salvation Army will be brighter.’

A musical finale of ‘Shine, Jesus, Shine’ followed and Rebecca Barton, alongside the General and Commissioner Cox, concluded with a benediction.

‘God, thank you for always being there for us,’ she said. ‘Help us to live each day for you. Help us to grow up to be the people you want us to be.’