Singer Ayoung Lee grew up in Korea, with her officer parents, with a dream of working in the opera. She started her opera training in her home country, but knew she needed to move to Italy, the home of opera, to make her dream a reality. 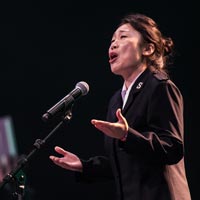 Determined, she quickly overcame her first hurdle – learning Italian. She was then accepted as a student at the prestigious Santa Cecilia Conservatory in Rome, which necessitated a move halfway around the world. She studies there with the hope of conducting and directing an opera. During her studies she has joined Rome Corps, where she is the pianist.

Through her involvement with the corps, she was invited to sing during General André Cox’s visit to the Italy and Greece Command. After that performance she was a soloist at the European congress in Prague, Czech Republic, and now at Boundless.

Despite her busy schedule of performing and studying at the conservatory, and her commitments at the corps, she happily took on the challenge of performing at congress – even committing to learn all the songs in English.

‘I want to share this gift that God has given me – this ability to sing, and to share in ministry with everyone at the congress,’ Ayoung said.

Having already performed in sessions 3 and 4, she will share her vocal talent once more during the final Sunday session.

She adds: ‘It’s really fun singing with people from other countries and other languages. There are lots of people here who are not trained musicians, but they’re brilliant! It’s great to be here together.’