A Match Made in Heaven?

In 1891, in a deprived area of east London, The Salvation Army opened a match factory. It was a direct response to the ‘sweated labour’ conditions experienced by employees of other match-making companies: poor pay, excessive working hours and exposure to toxic chemicals – particularly white phosphorus, which caused the debilitating and often deadly condition known as ‘phossy jaw’. The Army’s quest for justice had a dramatic effect – enhancing the quality of life for employees not just in its own factory but also applying pressure to other companies to make similar improvements. The British Parliament subsequently passed legislation prohibiting the use of white phosphorus. 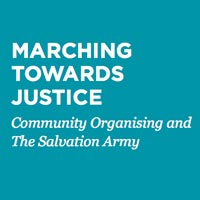 On Friday 3 July, Salvationists gathered at the historic factory site – now part of the Bryant & May Match Factory complex – for the launch of Marching Towards Justice, an initiative devised by local corps officers Lieutenants John and Naomi Clifton with Majors Kerry and Nick Coke, in association with the Centre for Theology and Community. A ‘call for a return to our justice-seeking roots’, the report explores four ways in which Salvation Army corps can position the fight for social justice as an integral part of ministry.

The ‘Marching Towards Justice’ report can be downloaded from sar.my/marchingtowardsjustice