March Down the Mall caps off Boundless

Droves of Salvationists poured onto the streets of Central London for the final day of Boundless – The Whole World Redeeming on July 5. 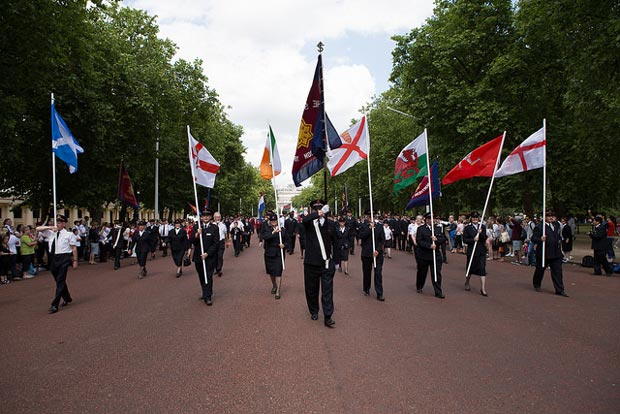 Over 2,500 representatives from each of the Army’s 126 countries marched from Horse Guards Parade Ground, down The Mall, toward Buckingham Palace and lastly to Constitution Hill, with an additional 10,000 members cheering on the celebration.

‘In 1865, The Salvation Army was born on the streets of London,’ Cox said. ‘It is entirely appropriate, then, that we should return to those streets to conclude our 150th anniversary celebrations. We have had a wonderful week of fellowship and worship at The O2 but now – as is our tradition – we want to share our joy and faith outside our own walls.’

The Army has an extensive history of marching on the streets of London. Its officers, soldiers and adherents have marched during previous international congresses – including in 1978 and 1990 – as well as in 2011 for the ISB’s 120th anniversary celebration.

Major Carol Horton from Australia was among those cheering on the festivities. ‘It’s always really exciting to see,’ she said. ‘It reminds you of how vast the Army is.’

Lieutenant Hean Suk Choi, South Korea native and corps officer in the United Kingdom, likened the march to an open-air meeting. ‘It’s our unique expression to the public to share with everyone the culture of The Salvation Army,’ she said.

Her husband, Lieutenant Kook Hwan Rho, added, ‘We have been given an opportunity to meet Salvationists from 126 countries, but we feel like there are no strangers. Everyone immediately felt like brothers and sisters.’

Major Russell Czajkowski, San Antonio (Texas) Area Commander from USA Southern territory, said he was very impressed by the congress’s offerings, particularly Session 7. ‘The General’s message to submit ourselves was very inspirational,’ he said. ‘That was my favorite part of Boundless.’

Lieut-Colonel Seth Apeeteng of the Rwanda and Burundi Command said, ‘Everything about the congress was fantastic. My spirit was moved. Now, I’m going to call my people to go out into the streets and share Jesus Christ.’

The General added, ‘The march marks the end of the anniversary celebrations but it is also a start – a launching point as members of God's Army return to their homes and neighbourhoods across the world, ready to continue serving God and mankind.'

Tweets by @Boundless2015
Ephesians 3:8 - Preach to the nations the BOUNDLESS riches of Christ