Lessons From the Future

Throughout Major Janet Robson’s series of appointments over the past 20 years, she’s encountered models of honesty, humility and how to worship. 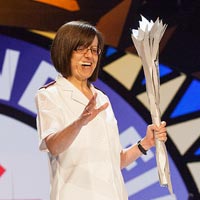 What she’s learned: you don’t have to look too far for them – just look down.

‘God is challenging me all the time about what children can teach us and the contribution they have to make to the life of the church,’ she said. ‘I think we tend to view them as consumers and not participants.’

Now the International Youth and Children’s Secretary at International Headquarters, Robson argues that we have as much to learn from children as we have to instill in them.

‘I think there’s a spontaneity, in which children generally are not afraid,’ she said. ‘If they feel it, they’ll say it. When you think of that in a worship context, how beautiful is that? Children will put God before themselves.’

Her calling toward children’s ministry started in college, while she was working at a summer camp in the USA.

‘I fell in love with the whole programme, but just seeing what God could do in the life of a child in one week really inspired me.’

Here at Boundless – The Whole World Redeeming, she’s coordinating Late Night Alive, a free late-night talk show to conclude each day’s offerings that is open to all age groups. She’s also speaking at NEON, a youth gathering led by ALOVE – the United Kingdom Territory with the Republic of Ireland’s youth department.

She’s pleased by the amount of content available for children at Boundless as well as the General’s strides to make youth a priority in The Salvation Army. Still, she’s eager to flesh out the Army’s children’s ministry and help each territory move beyond mere verbal support.

‘I honestly believe that a four-year-old can a make a contribution to the life of The Salvation Army that is as important as the one that you or I or anyone else can make,’ she said. ‘It’s just figuring out how we wrap our heads around that, how we help them.’