Recently uncovered photos, artefacts on loan from collectors and interactive videos are taking Salvationists on a journey through the history of The Salvation Army in ‘Our Boundless Story’, an historical exhibition at Boundless 2015. 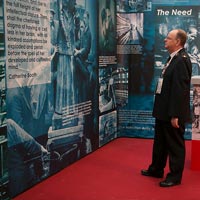 From a pair of Founder William Booth’s boots, to memorabilia from past congresses and relics from the Hadleigh Farm Colony, there are artefacts from all walks of life.

‘Some artefacts will be unique,’ said Congress Coordinator Lieut-Colonel Eddie Hobgood, who has helped to curate the exhibition. ‘I consider myself a bit of an Army historian, but I’d never even seen or heard of one of the artefacts on display. I was really excited to get my hands on it!’

To have a refined, open experience that isn’t cluttered with display cases, Lieut-Colonel Hobgood said the Congress team decided to make the exhibition a portrait gallery. Getty Images uncovered a number of rare photographs that are believed to be more than 100 years old.

Ala Lloyd, an architect and production designer from Corporate Magic, the congress production company, helped craft the experience.

‘My job was to make sure the theatricalness comes across,’ Ala said. ‘It is a positive, progressive experience rather than just a bunch of old photographs. It’s an emotional journey. I’ve been really touched by some of the imagery.’

Lieut-Colonel Hobgood noted that the photos move from black and white, to sepia and then colour as a visitor progresses through the exhibit, a symbolic walk through the Army’s history and into the future.

A self-led experience, Army historians are on hand to provide additional information, along with the film William Booth – A Passion For The Poor, produced by the United Kingdom Territory with the Republic of Ireland, which contains rare footage of William Booth’s funeral.

To highlight the Doughnut Girls and the Army’s wartime ministry, a canteen is situated inside the exhibition. The Salvation Army partnered with Krispy Kreme, which donated 20,000 doughnuts that are being given out from the canteen.

Located in the Boundless Experience, a public quarter of The O2, the exhibition is accessible by delegates and non-delegates alike.

‘That’s one of the great things about The O2. There’ll be 15,000 to 16,000 Salvationists, but there will also be thousands of people that come in and out of the facility every day,’ Lieut-Colonel Hobgood said. ‘We felt like this would be a really good opportunity for us to raise non-Salvationists’ awareness of what The Salvation Army is and why we’re here at this specific moment.’

The exhibition is an experience for the whole family. As Eddie said, ‘Regardless of your age you’ll see something that will interest you.’