The Hong Kong and Macau Praise Dancers were so keen to keep their routine a surprise that their performance in session 2 of the congress was their debut. 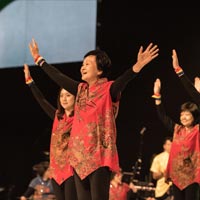 ‘In Hong Kong, people like to take lots of photos and videos and put them on Facebook, so we decided to keep our routine top secret,’ said group member Lisa Shiu. ‘That meant we had never performed in public before, so we were very nervous.’

Keen to bring a flavour of the Far East to congress, the group of 29 members formed especially for Boundless 2015. They have practised since last September, and from Easter had weekly rehearsals.

They are offering two routines, one to ‘O Boundless Salvation!’ – featuring traditional Chinese instruments – and ‘Jehovah Is My Shield’, which offers Taiwanese influences.

The cross-cultural style is also reflected in the group’s membership, which includes dancers aged from seven to 67 years old, with four males. Two members from mainland China learned the routine from Major Jeremy Lang, who travels back and forth between the Chinese capital, Beijing, and Hong Kong. It is extremely rare for a Salvationist from mainland China to be able to attend an international event such as this. ‘Everything for me is new and so exciting,’ said Vida Li. ‘This is an unforgettable experience.’

Hui Yan echoed this sentiment: ‘This is my only chance to be part of congress. It’s my honour to represent Hong Kong and Macau Command.’