Historically, the term “congress” is applied comprehensively within The Salvation Army to describe any series of meetings and/or events made unique by virtue of a special occasion or purpose. Within this framework, the term is normally used by Salvationists in connection with gatherings that take place at a command, territorial, national, or international level. On the international scene, there have been seven such events since 1865, all of which, with the exception of one were held in London, England.

The first International Congress took place between 29 May and 4 June of 1886, only six years after the first overseas extension of the Army’s work. It emphasised the cultural and ethnic diversity of the Army, while the meetings included reports from around the world, moving testimonies from converts, addresses from Army leaders and an all-night of prayer. In one climactic moment, a mile-long procession through the City of London and along the Thames Embankment drew a crowd that police estimated at over 100,000 persons.

The second International Congress, known as the “Jubilee Congress,” convened eight years later in July, 1894. The occasion was the fiftieth anniversary of the Founder’s conversion and the twenty-ninth year of Salvation Army service. 500 representatives attended from all countries in which Army work had been established.

In a War Cry article published at the end of this Congress under the title, “What Next?,” the Founder again reminded officers and soldiers alike that the Army’s current position of “discipline and power and influence” should not overshadow the “day of small and feeble things.” He wrote:

Thousands will not compose your audiences on every occasion, nor hundreds flock to your penitent form every night, but let us be grateful for the bruised reed and smoking flax, and mind we do not break the one nor quench the other. Praise God for ones and twos and see to it before all else that we do the work given to us with all our might, and that we do it well. 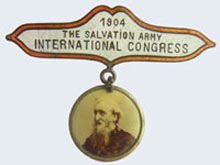 From 24 June to 8 July l904, the third International Congress brought together representatives from forty-nine different countries and colonies. Meetings were held primarily in the “International Congress Hall” that had been erected on the Strand for the occasion and which held 5,000 people, far more than any other venue in London at the time. Organized principally by the Chief of the Staff, Bramwell Booth, and Commissioner George Pollard, this particular gathering was praised in the British press as “a model of skilful[sic] and dignified management.” (Daily Telegraph, quoted in Wiggins, Vol. IV, p. 256) The schedule included special music festivals and separate meetings for officers.

It was during the third International Congress that two other events of note took place. First, General Booth was received by King Edward VII at Buckingham Palace, an event that the War Cry heralded as the “beginning of new recognition” for the Army. Second, for the first time, the Founder moved from meeting to meeting by car. While the novelty of the automobile certainly raised some comment, it was as fine a demonstration of Booth’s commitment to innovation and progress as any Salvationist could have wished.

The next International Congress in 1914, the first to be held after the Founder’s death, was marred by what Wiggins refers to as “perhaps the greatest tragedy in the whole history of The Salvation Army.” (Wiggins, Vol. V, p. 100) On their way to the festivities, 167 Canadian Salvationists were killed on 29 May when their vessel, Empress of Ireland, was rammed by another ship in the Gulf of St. Lawrence and sank within fifteen minutes. Among the dead were the Territorial Commander, Commissioner David M. Rees, his wife and daughter, and the bulk of the Territorial Staff Band. Memorial services were quickly arranged and took place a week before the Congress, on 5 June, in the Royal Albert Hall.

Despite this disaster, the fourth International Congress, which was referred to as the “Congress of Nations,” featured large crowds and manifested the extent to which the Army’s ministry and influence were still growing around the world. The 2,000 overseas delegates included 720 from the United States who were led, not only by Commander Evangeline Booth, but by former President Theodore Roosevelt as well. General Bramwell Booth reported that the Army was then at work in fifty-eight countries and colonies and ministering to eighty-four ethnic groups in thirty-four languages. The official History of The Salvation Army comments that the fourth International Congress was the “most outstanding feature” of this period in Army history, an event which “consolidated the spirit of the Army’s scattered regiments and so left it unshaken by the holocaust of the 1914 Armageddon.” (Wiggins, Vol. V, p. 300) 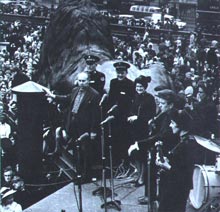 While not officially classified as a Congress, 1,800 Salvationists from around the world gathered in London to observe the one hundredth anniversary of the Founding of The Salvation Army. The 1966 Salvation Army Year Book chronicles the event and records that General Frederick Coutts conducted an open-air meeting in the East End of London, where there now stands a memorial to the Founder commemorating his first open-air witness and the beginnings of what was to become The Salvation Army.

Her Majesty Queen Elizabeth spoke at the inaugural ceremony at the Royal Albert Hall and said,

The service conducted by William Booth in a tent on a disused burial ground in the East end of London in July 1965, was the start of on eof the great world-wide religious organizations, supported and respected everywhere it works. The secret of its success lay in William Booth’s complete self-dedication to the will of God and to His service, and in passionate love for the souls of men and women.

One highlight of the event was a twist on tradition, where Salvationists who marched from Horse Guards Parade to Trafalgar Square were met by thousands who had gathered for an open-air meeting led by the General and featuring the wildly popular Salvation Army Christian pop group, The Joy Strings.

Organized under the direction of Colonel Brindley Boon, the fifth International Congress commenced on 30 June 1978 under the leadership of General Arnold Brown. The occasion was the 100th anniversary of the change in the name of William Booth’s movement from the Christian Mission to The Salvation Army. Inaugural ceremonies at the Empire Pool were attended by HRH the Prince of Wales, and a special service of thanksgiving was conducted in Westminster Abbey. Before the Congress adjourned on 9 July, delegates had heard a number of powerful messages, not only from the Army’s leadership, but from such revered figures as the Founder’s granddaughter, Commissioner Catherine Bramwell-Booth.

The sixth International Congress, which ran from 29 June to 8 July 1990, adopted the theme With Christ Into the Future and was organized successively by Commissioner Robert Bath and Colonel John Larsson. General Eva Burrows, only the second woman to lead the Army worldwide, presided over meetings for more than 3,500 overseas delegates and thousands more from the United Kingdom. In final meetings on 8 July, almost 9,000 Salvationists jammed both the Royal Albert Hall and the Wembley Arena to sign covenant cards and thereby re-consecrate themselves to the Lord’s service.

Under the theme, The Army Next - Carrying the Flame into the Future, the International Millennial Congress signified The Salvation Army's commitment to the service of God and Man in the new millennium.

The Millennial Congress took place from 28 June to 2 July 2000 at the World Congress Center in Atlanta, Georgia and was the first International Congress to be held outside of London. The weekend welcomed over 20,000 delegates from around the world. With an emphasis on sponsored delegates, over 1,400, officers/soldiers were participants in this life changing event. The well planned and executed programs gave all a great sense of worship and appreciation for the World-Wide Army.