Maranatha Tours (UK), who have close links with The Salvation Army, have been organising tours to the Middle East for 25 years. These tours will be led by Major’s Andy and Gwen Cox and Major’s Dawn and Graham Mizon, who have experience in leading Christian tours to the Holy Land.

Spaces are limited so visit the Maranatha Tours website to secure your place.

Will you be in the United Kingdom before the Boundless 2015 International Congress begins? The UK Territory will host six overseas music sections prior to congress. Enjoy music by the Amsterdam Staff Songsters, Chicago Staff Band, Melbourne Staff Band, New York Staff Band, Pasadena Tabernacle Songsters & Youth Chorus and the Vasa Gospel Choir in a variety of venues across the UK.

For more information and the itinerary of each group, visit the UK Music Ministry Unit website – www.salvationarmy.org.uk/pre-congress-tours. 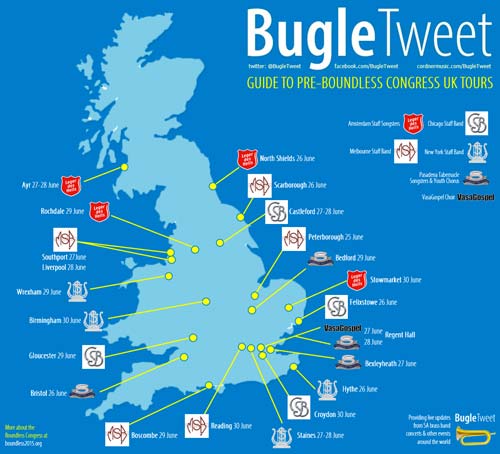 Regent Hall are hosting a number of concerts involving some of the musical groups performing at the congress including Vasa Gospel, Ontario Central East Divisional Youth Chorus, Angola National Band and others.

International Headquarters will be hosting tours of the building at specific times before and after the congress.

The Heritage Centre will have additional extended hours during the week of congress. Visit the museum on Monday 29 June to kick off your week between 9.30am – 8pm. On Tuesday 30 June through Friday 3 July visit between the hours of 9.30am – 5pm. On Saturday 4 July you have the opportunity to drop-in between 10am – 5pm. After congress they will return to normal hours, Tuesday through Friday 9.30am – 4pm.

In response to the congress theme of "Innovating for the Future", William Booth College is organising a post-congress day of theological reflection and discussion on 6th July 2015. Participants will discuss the outcome of recent research in Salvation Army contexts as well as the implications of thinking shared during the Boundless Congress itself.

Commissioner William Francis and Dr. Roger Green will be leading a Post Congress Heritage Tour that begins the day after the Boundless Congress concludes. The tour will be a custom designed 10 day tour exploring the sites and scenes of Salvationist roots throughout England. And to top off the adventure, there is the opportunity to travel through Ireland on a 5 day extension tour.

For 10 days immediately following the international congress, a mission team made up of Boundless delegates will receive training in evangelism, praying for the sick, prayer walking and more in William Booth’s hometown of Nottingham, UK. As well as receiving ‘input’, there will be plenty of ‘output’ as missioners worship together, pray together and love the lost together to bring about revival in the community of Nottingham.

Are you planning a tour of Europe before or after the international congress? Don’t forget to visit the new Salvation Army Museum (in Dutch: Leger des Heils Museum) in the centre of Amsterdam. Right behind the beautiful old building where Major Bosshardt started her Goodwill work.

The museum tells the fascinating story of The Army in The Netherlands and its development until now. There is an English-spoken audio tour available. Join Major Bosshardt on her bench in front of the 17th century building where she started the Goodwill work. 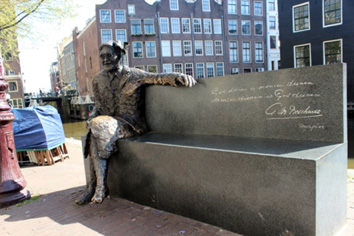